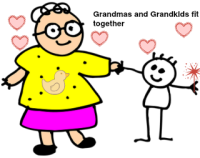 The only known force capable of causing women to turn against their daughters is the offspring of those daughters. Grandkids!
Women simply do not care if the erstwhile apple of their eye loses her attractive figure if it means babies. Grandmas consider it their right to cuddle and coo the newborns. The microsecond Grandma first gets her hands on a grandkid the bond is established for which there is no kryptonite.
Grandma becomes a walking picture album. No photo is ever thrown away, only buried under piles of new ones to be whipped out on unsuspecting, uncaring, and uninterested audiences. Each picture will be gone over lovingly in novel-length detail.
“This one was taken the day my little darling made a five-star mess in her diaper.” Grandma holds the picture out for us to touch like it was a moon rock. Uh – no thanks.
Grandmas go a little crazy and their lives kick into high gear. A whole new way of living is implemented, centered around the nurturing, entertainment, and education of the grandkids.

Men cease to officially exist when grandkids arrive on the scene.

Now it’s true that a lot of men are very active with their grandkids, but it must be understood that this time is orchestrated and allowed by Grandma.

If Grandpa gets out on the loose with a grandkid and goes off Grandma’s preapproved script he’d better have a life-threatening reason because that’s exactly the position he’s likely to find himself in with Grandma.

Surely there’s a study somewhere confirming the wisdom of men who deal with grandkids by turning off hearing aids, repeating the phrase, “Go ask your Grandmother,” and taking a nap.

Your turn to tell how great your grandkids are. Leave a comment.
Blog is posted on Wednesdays
Thank a veteran.