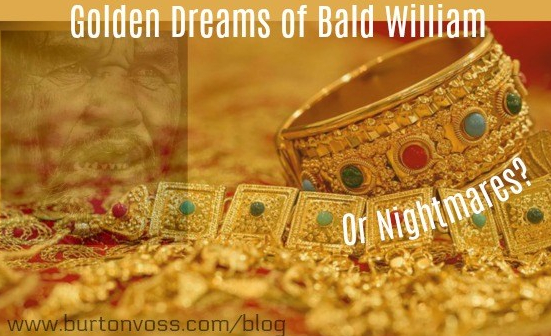 Bald William Has His Day

Easterly scanned his friend for subtle signs of a plan to overpower their captor. Indians were notorious for cunning and bravery, but Atá Halné, under the gun of Bald William, stopped gathering his gear and returned to sit under the tree.

Bald William pointed his gun at Atá Halné, Esther May, and Easterly in turn. “Why do you look so sad my friends? This is a good day.” Like a coyote, he raised his chin and howled. Then his laughter filled the park-like area, surprisingly jovial and friendly as if they were at a neighborly celebration. “I have dreamed of being rich. But now that I am, I find problems on how to contain my wealth.”

The rogue trader spread his arms wide. “I now have two wagons. ¡DOS! And look here. Horses!” He swept a hand toward the chestnut stud, Skewy, and Atá Halné’s horse, all hobbled together. Another wave took in Esther May’s gelding tethered with the mules that were supposed to be hers. “Four saddle horses and two mules as company for my Rosarita and Hombrecito.”

Easterly’s bottom was poked by the hard knob of a rock. If he could scooch around to pick it up without Bald William seeing, he may have a stone-age weapon. Easterly positioned Hund so the injured dog appeared comfortable and began molasses movements. The ridiculous old saw, “Kill two birds with one stone,” played through his thoughts.

Bald William scratched his jaw stubble. “Teaming my children with those mules to pull both wagons won’t do. They don’t know how to work in a hitch that big.” He gazed at Hund. “Animals should be loved for the gifts they give us. Never hurt, like him.”
He grinned a most cordial smile. “People, though, have value. You, my dear,” he bobbed his weapon at Esther May, “have a destiny working at a place I know in Albuquerque.” He shrugged. “It’s not so bad. You’ll be fed and housed. The sooner you learn to accept your fate, the easier it will become.” The trader winked at her. “You’ll fetch me a good payday.”

Easterly packed dirt under his fingernails as he glacially dug the rock from the ground. A rush of heat went up his neck when Bald William squinted at him. When the renegade moved his focus to Atá Halné, Easterly exhaled, feeling exposed and trembled.

“You,” Bald William said, “are not from here. You look nothing like the Apaches I know.”

Esther May jerked upright. “You trade with the Apaches? You might as well shoot white folks.”

“I wouldn’t mind, but my way is easier. The Apaches get the blame and I get the money.”

“Is that all you care about? Money?”

“Until I get enough of it to live like I want.”

“But you are money. That’s what I’m telling you. I sell you to Miguel’s and then I return this runaway Navajo to Fort Sumner.” He leaned toward Atá Halné with an almost conspiratorial whisper. “You’re not a clan chief, are you? That’d increase my reward.”

Atá Halné stared straight ahead. To Easterly, the Indian appeared neither afraid nor interested, as if his mind were elsewhere.

Bald William indicated Easterly. “Here’s what you will do, young white boy.”

Atá Halné repositioned himself and placed his hand on top of Easterly’s.

Why did Atá Halné prevent Easterly from picking up the stone? Leave a comment.