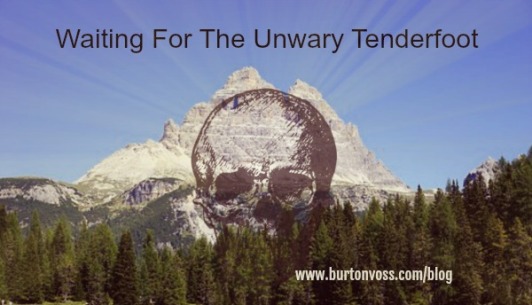 C.J. stood in the narrow mountain road and waved at the approaching wagon. A man and woman jostled on the seat as they came down the rough trail. The man waved back; the woman held a rifle across her lap.

C.J. pointed to the clearing in the junipers and oak brush where he and Esther May set up camp and made a sweeping, “Come on in,” swish of his arm. The man waved again.

Esther May filled a pot with water from the barrel on the wagon. “We’ve got to find water tomorrow. Our little herd goes through a load fast.”

“That’s the truth. Maybe these newcomers will have an empty barrel we can trade for.”

Esther May humphed. “Sure, Cornelius James Easterly. People always make sure to carry dead weight over mountains in case they find a trader.”

Her retort stung, but the others were pulling into the clearing, and C.J. didn’t want to be in an embarrassing argument as company arrived. He held his lips tight and in an urgent aside said, “Esther May!”

Slow To Accept A Welcome

The newly arrived wagon came to a stop just inside the clearing. The couple on the seat stayed where they were. They weren’t smiling.

C.J. moved to greet them. The woman shifted the rifle in her lap so that the barrel pointed in his direction. C.J. stopped and touched the brim of his brown slouch hat. It was the only one he found after losing his proper cowboy hat in the flash flood. “Why don’t you get down and rest a spell? I’m C.J., and over there’s Esther May. She’s cooking up the rest of the venison, and you’re welcome to share it with us.”

The man looked around from his wagon seat. “Much obliged. I ‘spect we will in a minute.”

C.J. glanced where the man looked, saw nothing, and shrugged. “Something you’re waiting for, mister?”

“Yeah. Them.” He pointed at two riders coming through the brush and into the far side of the clearing. He raised his chin and hollered, “How about it, Eugene?”

“It’s clear, Dad,” the nearest rider yelled back. “They ain’t nothing but pilgrim fools.”

The man jumped down and extended a handshake to C.J. “There now, you see? We’ll be happy to share supper with you. Ma’s got some fresh meat—bear we killed yesterday. We can throw that in the pot.” He helped the woman off the wagon, and she crossed the distance to talk with Esther May.

The man poked toward himself with a thumb. I’m Silas, my wife’s Miriam.” He pointed to one of the riders. “That’s our son, Eugene, and this other fine fellow is Harold.”

C.J. gulped his mouth closed and eyed the two riders. Their mounts were brown, shorter than his stud but muscled. Both young men were dark-haired under their western hats, wore homespun shirts and chaps. Harold had a pistol strapped around his waist, and both had rifles.

“I didn’t hear you coming through the woods,” C.J. said.

Silas led his team sideways, blocking the entrance to the clearing from the road. “That was the idea. In this country, you either have to be ready to spring a trap or walk into one.”

What is Silas talking about? Leave a comment now.

How were Apache youth raised? Here is one article.