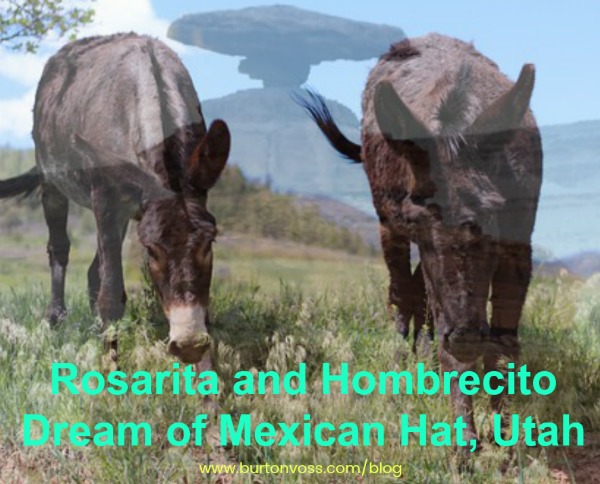 Two mismatched mules pulled a wagon off the road toward Easterly’s encampment. The swarthy driver had his chin up, tilting the wheel-sized sombrero brim above eye level. He had the loose reins dallied around the brake handle, apparently preferring to guide the animals with sing/song voice commands.
“Up, up, Rosarita. We’re not there yet. And you, Hombrecito, keep on. Don’t let your sister do all the work.”

The odd assortment of man and animals arrived under the trees. “Stop now, my children. Rest yourselves while I talk to fellow travelers.” He dismounted without setting the brake and approached Easterly, Atá Halné, and Esther May.

“I am Bald William,” the new arrival said, removing his sombrero. Greasy black hair rose in tufts above the hat-line around his head. Below the line, the sweaty strands reached his collar and stuck out over his ears. “I like to meet pilgrims such as yourselves, and I would love some coffee if you’re offering.”

“We were leaving,” Atá Halné said. “Perhaps another time down the road.”

Easterly glanced at his partner. They had just sat down for their powwow. Nothing had been decided. He didn’t even know what Atá Halné had in mind for the meeting in the first place. Recent events, though, had reminded him of the need to trust the Navajo. He kept quiet.

Esther May had an upturn to her lips. Easterly noted that she had a fetching smile. “Bald William,” she said. “How appropriately named.”

He replaced the three-platter-sized hat. “I hear that all the time. It breaks the ice, as they say.” He made a shallow bow. “A pity that you’re leaving or I would tell you that it was the name of a would-be sutler at Fort Sumner. He was a bad merchant and a worse poker player. I won his business and kept the name.” He dragged a sandal toe in the dirt. “Poor me. Even after all the Apaches escaped last year, many soldiers are still there watching the Navajos. Some say over eight thousand.” He glanced at Atá Halné. “But they don’t want to do business with a Mexican. I told them I was a tanned Mormon, but they didn’t believe me.” He sighed and spread his arms wide. “Now I’m just a peddler. Trading wherever I can.”

Atá Halné walked toward his gear. It was plain to Easterly that his friend was serious about leaving. He scooped up Hund and stood. “Well, good luck in your dealings. Maybe we’ll see you at the next stop. Are you going north or south?”

Bald William bent to snap a dry sprig of grass that he used to pick his teeth. “That’s a most interesting question. I have been going north, following some bandito gringos. I stay far enough behind so they don’t bother me.” He motioned around the area. That freight and team look like theirs, but I don’t see them.”

No Coffee, No Friend

Esther May was on her feet, smile vanished, face pale. “Well, as Arthur said, it’s time for us to go.”

Bald William tipped his sombrero again, a white-toothed smile pulled his mustache into a horizontal line. He drew a pistol from inside his hat and leveled it on Esther May.

“I think maybe we’ll talk some more. Very easy now, put your gun on the ground and step back.” He turned sideways and waved his sombrero in a “come here” motion at Atá Halné. “Sit down with your friends.”

What does Bald William intend to do? Leave a comment.