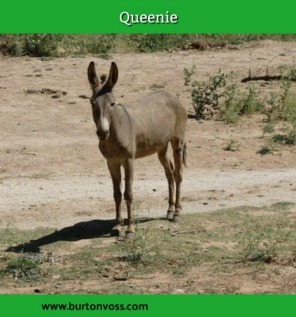 “Yalla has his hackles up.” Anna reappeared to the group gathered around the porch. “Someone’s coming.”
Kettie fetched her shotgun. “Let’s go.”
At the copse of oak near Ragtail’s camp, Damn Donkey took in to that breed’s convulsive screeching called braying.
Cecilia covered her ears while an answering call echoed from the direction of the wet.
The women fanned out in different directions like they had practiced for just such an occasion leaving Ragtail and Lark where they stood.
The far braying was coming closer. Damn Donkey used his teeth to untie his lead rope from the ground stake where he was tethered.
“I suspected he could do that,” Ragtail said. “My knots couldn’t have been loose so many times.”
Damn Donkey trotted off after Kettie. Anna and Yalla disappeared through the brush.
“Yer fool burro gave away our location,” Lark said. “You’d better hope they’re friendly, whoever they are.”
“If they heard yer singin’ maybe they’d turn around and go back. Why don’t you give it a try? Yer not much worse than Damn Donkey.”
Lark shook a fist at Ragtail. “If it’s a posse or some lawman after the wimmin, I’m holding you responsible. I’m not going to prison with them. It’s your fault that I’m here.”
“What about yer spot in the barn? A minute ago you was all cozy to move in with one of the gals.”
Lark whirled around. “My poke’s in the barn. I’ve got to get it out before they get here.”
“Then what?” Ragtail asked. “Run t’other way? Fergit yer lady love?”
Lark took a step toward the barn and froze.
Kettie stopped and Damn Donkey bobbed his head in looping nods.
Into the clearing jogged a jenny. The female burro had her long ears up, twitching. She and Damn Donkey met and nuzzled.
Lark peered hard at the newcomer. “Queenie!” he yelled. He quick-stepped to the animals, but the little brown jenny turned her hindquarters to him. Whenever he moved to reach her head she maneuvered to keep him behind her.
He kept at it until Queenie made a little hop lifting both back hooves off the ground and tagged him with one.
Ragtail hooted. “She remembers you all right, Lark.” Yer gonna have to do more than that to git back in her good graces after abandoning her in the desert.”
“She’s not too mad,” Lark said as he returned and rubbed his shin. “She could’a popped me bad, but she didn’t.”
Kettie reappeared and called out, “It’s okay. Nothin’ but that one burro. Nobody’s comin’.”
Cecilia met Kettie and reached for the shotgun. “Let me have that,” she said and turned to Lark.
“I heard what you said. You were going to leave me.” She pointed the gun at Lark’s belly button.
“Wait a minute now. Let me explain—we all reacted in different ways when we thought someone was coming in. Didn’t we?”
Ragtail giggled. “I think you used up all your Tommys.”
Cecilia’s face was red and shiny as a desert sunset. “You wanted to leave, so leave.”
When Lark started for the barn, she said, “Not that way. Yonder’s the road. Get on it.”
Lark almost hit his high notes with a whine. “But my stuff’s in the barn. I’ll need it.”
“You’re lucky I’m letting you walk out with your boots on. Get!”

With one accord, everyone had gathered around Ragtail’s campfire. Damn Donkey and Queenie grazed nearby. Even crazy Anna and Yalla hunkered in the fire light.
“Ain’t we a right sightly bunch?” Kettie said. “We can’t go on living this way—running off whenever we hear a strange noise—not knowing who to trust or who’s coming for us.” She gathered her skirts, shifting her spot on the ground. “I reckon I’m leaving.”
“Well, that’s it then,” Rose said. “Me too.”
Cecilia stared at the fire. “All of us? Can we leave together and maybe split up later?”
Esther May shook her head. “You heard Eb. He said that Anna and I can’t go back among people.” She leaned against Ragtail. “I’ll be happy to live here with you though, Eb.”
“Well,” Ragtail cleared his throat, “I’ll build that cabin like I said, but ever since I could walk I’ve had a gold pan in my hand. Before I’m too old, I’d like to git in some more prospectin’.”
“Eb, you can haul off prospecting and stay as long as you want anytime you want,” Esther May said.
“Really?”
“Sure. I’m going with you.”
Ragtail laughed and slapped his knee. “Then all we have to do is sneak into town first, then we’ll be all set.”
“I reckon so,” Esther May said, “we’ll need supplies.”
“Some,” Ragtail agreed. “Mainly, we’ll have to find a preacher and breeding stock fer a herd of goats.”
Anna straightened up with a grin so big her teeth shone in the flickering light. “You mean it? I can stay here with goats?”
Ragtail shrugged to the laughter of the wimmin. “It don’t seem no worse than havin’ a murderer fer a wife and prospectin’ partner.
Like Kettie said, ‘Ain’t we a right sightly bunch?”

I hope you enjoyed this particular tale Old Roy told. There may be more. Leave a comment.

To read the series, click on September in the Archive list to the right and start with Tales Old Roy Told.
Writing Fiction is published on Wednesdays.
Thank a veteran.

6 thoughts on “Lark Is Gone”